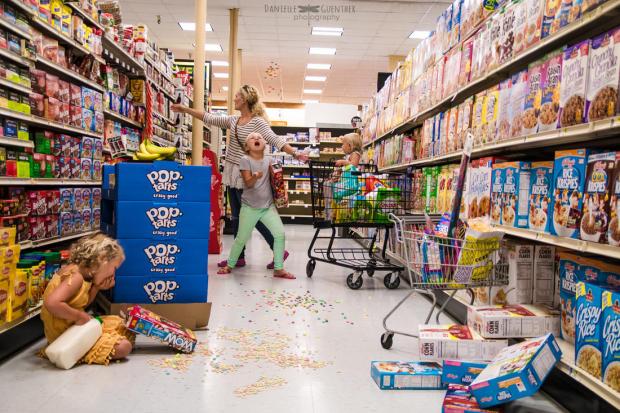 While perusing the isles of the grocery store one day with my 4-year old, I couldn’t help but notice the familiar sounds of a disgruntled mother (kind of resembles a ticking time bomb that’s about to explode) who appeared to be reaching her breaking point in the midst of isle 8, right next to the dairy. Her four boys, all under the age of 5, were running up and down the crowded isle, playing monkey in the middle with a tube of Pillsbury Cinnamon Rolls (and making impressively accurate monkey impressions, I might add), as passing onlookers offered their snide remarks and glaring looks of disapproval.

As much as the mother tried to ignore the looming judgment around her, while attempting to round up her boys to remind them that they were at the store and not the set of Planet of the Apes, her human limitations became all the more evident. She was clearly outnumbered 1:4 and probably wished she could teleport to a happy place (alone) or at least miraculously grow an extra set of arms. She wore a weary expression on her face while she reached for the coffee creamer- probably thinking to herself, “I’m going to need this today.”

For a brief moment, I felt sorry for her. I empathized with her frustrations with both her rambunctious kiddos, as well as the “offended” shoppers. After all, grocery stores are practically battle fields for mothers. The struggle is real- VERY REAL! But then I realized, despite the simple fact that I could completely understand how she feels, I was no better than the other onlookers. I shouldn’t feel sorry for her because her children aren’t “perfectly behaving.” Because even when our children are challenging, disobedient, and utterly frustrating, may we not forget- they are still a blessing from God.

“Behold, children are a heritage from the Lord, the fruit of the womb a reward.” -Psalm 127:3

It’s in these moments, society will quickly name children with all sorts of discouraging labels- embarrassing, distracting, and a nuisance. I’m certain the mother could even relate to these feelings in that moment. Yet, even when our children push our buttons (and our limits), they are a blessing, nonetheless. They have been fearfully and wonderfully made by a divine Creator, who as a  Father himself, must constantly bestow extensions of grace to His imperfect children.

Fellow mom, do not be dismayed. In every season of parenting, there will be a share of trials, but don’t allow the trials overshadow the triumphs. Since God entrusted you with little souls to train and nurture, you are highly blessed. And don’t allow discouraging moments with your children or even other onlookers convince you otherwise. Motherhood is not merely about survival. God has given us a calling and He has equipped us to answer that calling.

“Having children is not about surviving another day of changing diapers, cleaning up messes, refereeing sibling rivalries (or monkeys in the grocery store isle). It’s all about having another day to point your children to Christ, to train them to take their place on the front lines of the battle for God. ” -Nancy Leigh DeMoss Wolgemuth

Motherhood sometimes (okay, oftentimes) depletes us of patience, hope and even our joy on difficult days. We doubt our ability to be effective mothers and we may even doubt the gifts God has placed in our care. But God makes no mistakes. Your children are not by chance. They are a blessing- in spite of their imperfections and human tendencies- they are a blessing. And because they are a blessing, you are inherently blessed.

While I stood there and debated between apple or orange juice, I overheard an elderly woman speak to the discouraged mom, “Four handsome young men you got there.” The mother reluctantly nodded and added, “Thank you. If only I could get them to listen to me.” The elderly women gently placed her hand on the mother’s back and said, “I raised five children- two girls and three boys- sometimes it’s the most challenging children that grow up to be the most influential adults.” It was as though her words parted the storm clouds just enough so the mother could see a glimmer of sunshine on the horizon- and hope for the future.

That elderly woman has no idea that she will likely forever be known to that weary mother- who was at her wits end and the brink of defeat- as “the hero of isle 8. “What a beautiful encouragement for all moms that our work is not in vain. It can be extremely difficult to see past the day to day struggles. Sometimes we are too caught up with the tiring demands of what motherhood requires of us and easily forget that our children are indeed a blessing. So sometimes, God sends us a reminder.

“Her children arise and call her blessed; her husband also, and he praises her: ‘Many women do noble things, but you surpass them all.'”- Proverbs 31:28 & 29